Family photos is something very high on my list of priorities, probably because growing up I don’t have a lot of pictures of my family. Now that I have a family of my own, we save up money every year to hire a photographer (or 2) to document our life.

Speaking from experience, here are some tips to help with hiring a family photographer that is a right fit for you. 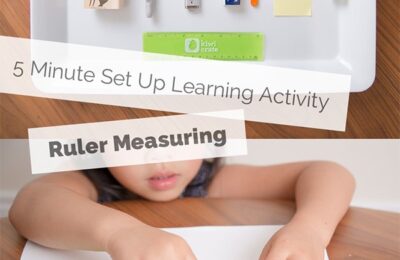 Hi, it’s Amy from The Connection We Share. For a while, I’ve been wanting to teach Elle how to use a ruler to measure. Since this week’s blog hop is ruler themed, I thought it would be a perfect time to do that!

My goal for this invitation to play is to teach Elle to measure things with a ruler and practice writing numbers. I thought it would be fun for her to measure an object and write down its length on a Post It and let her stick it on the object.

Come check out this fun and easy project and… bonus! 7 other blog friends have come up with a ruler idea of their own, to celebrate Back-to-School!

For the past few months, I’ve been in the process of re-decorating Elle’s room. I want to make a place for her growing book collection as well as create some meaningful art to display in her room.

One of the things I really want to display is her new skill of writing her name.

I know children writing their name is such a simple thing but for me it’s a big milestone. It was only the other day I witnessed my girl write her name all by herself for the first time!

We were at a community event and stopped at a booth where kids can paint their own frisbees. The girl operating the booth gave Elle (almost 4 years old) a white frisbee along with a black sharpie and told her to write her name on the back.At the beginning of the school year, her teachers taught her to trace her name written in dotted lines. Her tracing was everywhere and the letters had a life of their own! Then a couple months later her tracing got tighter and neater. Then she was writing straight lines and later her tracing was right on the dots. Up until a few weeks ago, she was able to write her name if she sees a sample of it.

So you could imagine my surprise when I saw her take the Sharpie from the girl and began writing her name. E-l-l-e she wrote, with the 4 letters filling up the width of the frisbee.

I was so proud of my girl! I cheered and we high fived. I commended her for her diligence which lead her to her accomplishment.

And so as I’m decorating her room and filling up a bunch of empty picture frames with meaning art, I want to frame her name written by her at age 3.8. 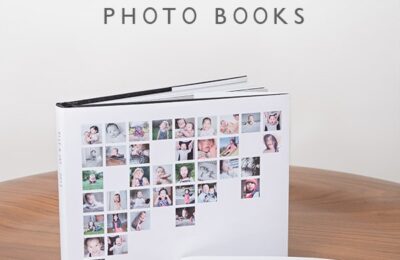 Last year I gave my dad a photo book for Christmas. This book contains pictures from our annual family summer vacation. And he LOVED it. I mean he literally was over the moon about it. He though it was one of the most meaningful gifts he has ever received.

For me this was a BIG deal, because my dad is hard to shop for. The man has everything he needs and he is really practical. He always tell us not spend money on him with frivolous things. When I saw how much he liked the photobook, I knew I done well 🙂

So for this Father’s Day, perhaps consider helping your kids create meaningful photo books for their dad. There are so many great on-line book making companies out there and they are all so easy to use. 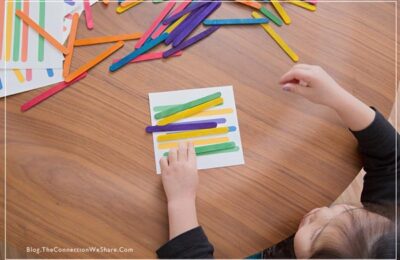 Hello everyone, it’s Amy from The Connection We Share, and I’m happy to be back with you again!

Lately, I’ve been busy making learning materials for my daughter Elle, one being this shapes matching game.

I have a regular 9-5 and when I’m at work, my in-laws or my husband looks after the kids (yes, I’m very lucky, I know.) They LOVE looking after the kids and they play with them, take them to the park , take them out for lunch and so on but 1 thing I thought they would enjoy is doing some learning activities together.

To make it really easy for my in-laws and husband to teach Elle, I have a box of educational activities all ready to go so when the time is right, they could take out some of these activities and do it with her.

﻿Hello again! It’s Amy from The Connection We Share. Thanks for letting me join you for another month on OSSS.

Like many of you, I have thousands of photos sitting on my phone and my computer.

I’m a firm believer we need to surround ourselves with photos of the people we love.

In our home, we have large collections of photos of our family together and I also make photo books with pictures of the kids. (You could see my Blurb photo books examples here). It warms my heart to see happy pictures of my kids and helps me remember what is most important =)

Being a busy mother, it takes a lot of time and energy to put together a collection of photos to display in my home. From deciding which photos to print and in what size, to framing and hanging, the whole process takes me a good week! Yes, this can be a daunting endeavor even just thinking about it and I do this for a living as a professional photographer! 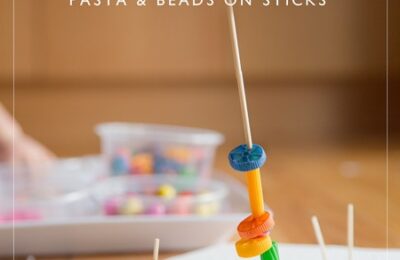 As much as I love hanging out with Elle the 3 footer, sometimes I need a few quiet moments to myself. Whether it’s to make dinner, do laundry, go to the bathroom by myself, upload a picture to Instagram…all these little alone moments keeps me sane.

To get these snippets of alone time, one of the best ways I’ve found is to occupy the kids with something fun.

An invitation to play is simply setting up something really simple for your children to engage with and create something with no boundaries. They are free to do as they wish with the materials given.

In this simple invitation to play, I set out a tray of ‘stuff’ for Elle to put on a stick.

I went through our craft cabinet and pulled out anything I can find with holes in it. I gathered 2 bowls of pastas in different shapes that we dyed recently, some wooden beads, some small plastic beads and some caps from those squeezable baby/kid puree in a bag (is there an actual name for these?). 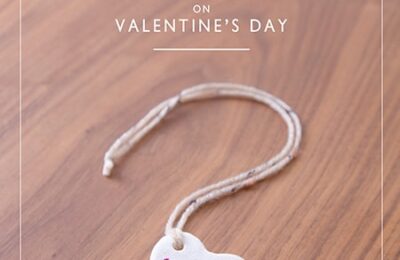 One of my goals as a mother is for my children to know that they are loved, cherished and that they matter.

Since Valentines Day is about showing people how much we love and appreciate them, I thought I would do a few special things to show my girl how much I love and cherish her. Read on for simple ways to make your child feel special on Valentine’s Day. 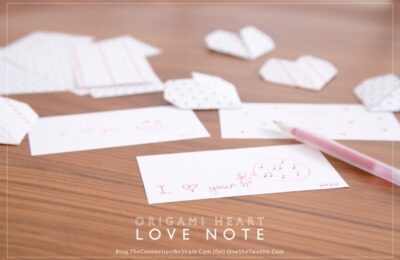 On this coming Valentine’s Day, I plan to fold some origami hearts with little love notes inside and leave them everywhere for my daughter to discover.

Since my little love is still learning her A-B-Cs, I’ll be drawing pictures in the origami as well as using words she recognizes. To make this super easy for you, I’ve created a printable of the origami paper for you to download. It includes 6 rectangles to make 6 hearts. All you need to do is cut, write and fold. I plan to hide these all over the house – peaking out from under her pillow, taped to her toothbrush, stuck under her cereal bowl, attached to the seat belt of her car seat, hiding in her jacket pocket, etc.