So, let’s just get this whole ‘yummiest EVER’ thing out of the way up front.  You see, this Chocolate Eclair Cake recipe is nothing new to the world of Pinterest, but most of the recipes out there use Cool Whip and Instant Pudding, which is completely fine, but will not yield you the yummiest eclair cake ever.  So take heed, my friends, and give this a try.  It was carefully crafted by the experts at Cook’s Country, who meticulously create and test recipes with the best ingredients, until they’re perfection.  In the past week, I have made this THREE times!  After we devoured the first one, which my husband declared as one of his ‘new favorites,’ I figured I would make  couple more for a family get-together.  Once again, a hit.  Those folks at Cook’s Country sure know what’s up.

The only thing I changed from their recipe, after I made it the first time, was to eliminate one of the teaspoons of vanilla.  It called for 5, but I did 4.  Five seemed a little too much for me.  I also cut the salt in half, but only because I had salted butter on hand, not unsalted, and I didn’t want to overdo it.  Other than that, I followed the recipe exactly. 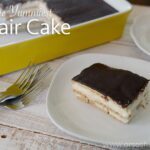 The Yummiest Chocolate Eclair Cake Ever

This Eclair Cake is extra special because it's made WITHOUT the usual Cool Whip and Instant Pudding... instead, everything is homemade and even more delicious! I suggest making this 6 or more hours before serving, so it has plenty of time to chill and set.
Servings 15 servings
Author Mariel @ Or so she says... ~ Adapted from Cooks Country

If you liked this recipe, be sure to check out these ones too:

Chocolate Fudge S’mores in a Mug