I remember the first post I did, telling everyone that I’m a Mormon and inviting people to learn more about why I believe what I believe.  It was scary!  I don’t know why.  My readers are the nicest, ever.  But, it’s still a little unnerving to put yourself out there and open yourself up for mean comments/emails, and a potential loss of readers and advertisers.  But, I knew it was worth it to me.  It is because of what I know that I feel so much happiness, hope, and peace, and it feels kinda selfish to not at least offer it to others.  So, with much anxiety, I clicked ‘publish,’ and I wasn’t turning back.  I was waiting for the rude emails to come in, but they never did.  Not once.  Everyone was so respectful.  Instead, I had hundreds and hundreds of readers email me asking to receive the package I was sending out (a free Book of Mormon and a packet that I put together with thoughts from over 30 popular LDS bloggers.)  Some emails were short and sweet, requesting the package, others expressed so much gratitude at my willingness to open up and allow them to receive this package for free, so they could find out for themselves.  Sometimes it’s hard to keep up on all my package requests, amongst everything else I have going on, and sometimes it gets expensive, shipping them all over the world… but again, it’s worth it. 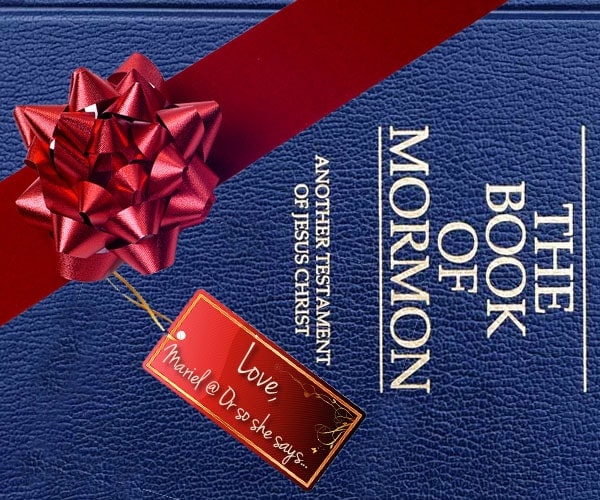 We all know the real reason for celebrating Christmas and sometimes it’s hard to stay focused on what’s really important.  I know that it’s so easy for me to get caught up with this blog, homeschooling, and just being a mom to a million little kids… okay, six.  But, I want you to know that I believe in Christ.  I am so thankful for everything He has done for me and continues to do for me.  The Book of Mormon is true and plays such a huge role in my life.  It doesn’t matter how many times I read it.  Every single time I do, I feel inspired, learn something new, and want to be a better person.  And heaven knows, I have a long way to go.

Just as in days of old, we have a prophet on the earth and 12 apostles, leading and guiding us in this chaotic world, through the power and direction of Christ.  This video is Elder Holland, one of my FAVORITE apostles, sharing his testimony of The Book of Mormon.  He is amazing.  Just so you understand, at the very start he is talking about Joseph Smith, the prophet, who was asked to translate the Book of Mormon by God, from the Golden Plates, that had been hidden in the earth by a prophet MANY years ago, as well as restore God’s church to the earth.  Joseph was persecuted, tortured, and eventually murdered in Carthage Jail, because of what he knew to be true.  Despite his death, The Book of Mormon has spread throughout the world and there are now more than 15 million members of The Church of Jesus Christ of Latter-Day Saints (also, known as Mormons.)  What Elder Holland is referencing at the start of the video is Joseph speaking to his brother, Hyrum, on their way to Carthage Jail, where they knew they would surely die.

So, with all of that said.  I just wanted to let you know that my invitation to receive a Book of Mormon and blogger packet from me is always open.  I get several emails from people worried that it’s too late.  But, it’s not.  I’ll do this until the end of time.

If you have an open mind and heart… and TRULY want to learn more, with no strings attached, just email me your shipping address to [email protected].

HAVE A WONDERFUL, WONDERFUL CHRISTMAS!  It’s been a fantastic year.  I’m so thankful to have such supportive and loyal readers, and I look forward to another great year ahead.