I made something way yummy last night, that I’ve been excited to share with you!  It needs a better name, but as of now its called “Spaghetti with Cauliflower & Cabbage.”  It’s a recipe from Lugano, some restaurant that I’ve never been to…but, after trying this, I’m thinking I should probably go.  Anyway, I’m not digging the recipe name because I would typically never make anything with that name…except, I noticed it had pancetta in it and THEN it caught my attention.  Pancetta is a real bugger to find at the stores SO I opted for ham and it turned out wonderful…who needs pancetta??  Oh, something else…when I told the Beard Man I was making this for dinner, he totally groaned and told me I should just stick to the recipes I have.  Lame.  I told him to cook his own blankity food.  He backed down. 🙂  So, when he served himself up some of this goodness, he totally apologized and said it was way good and to make it again.  Wassup, sucka.

Oh, bonus…this meal is super quick, easy and would be perfect to serve company! 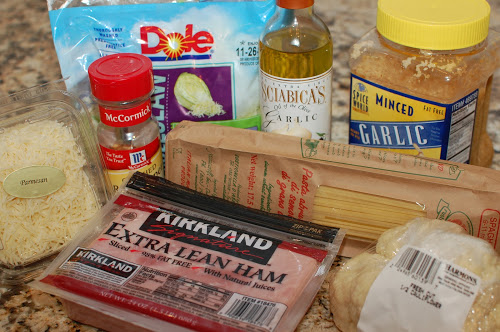 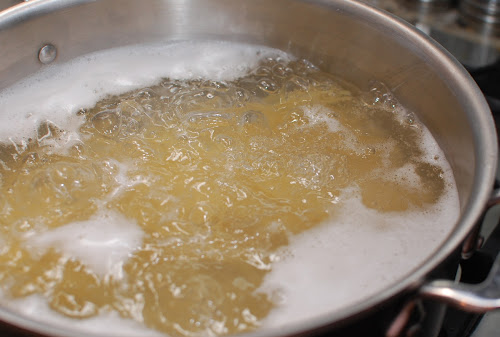 Cut up about a pound of ham (or pancetta) and fry it in a couple TBS of olive oil.  It really doesn’t matter how much meat you want.  We’re meat eaters around here, so I added lots of ham.  Fry it until it becomes slightly crispy. 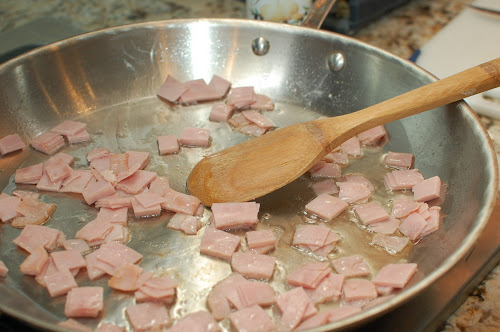 Add 2 tsp. of minced garlic (or about 4 garlic cloves).  This recipe really is super lenient…if you want more garlic, add more.  Whateva.  Cook for a couple of minutes.  Meanwhile, throw some cauliflower pieces in a covered bowl with a couple TBS of water and cook it in the microwave until its soft. 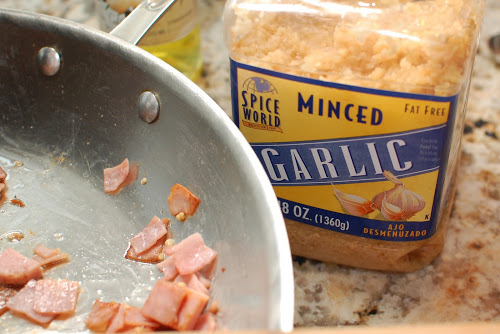 Add the cooked cauliflower pieces (I made mine pretty small, so as not to scare off the husband), some shakes of red pepper flakes, and salt and pepper to taste.  When you love it, throw in a handful of chopped cabbage (I just bought a pre-chopped bag)…however much you want. 🙂  Stir together.  Turn heat to lowest setting just to keep it warm. 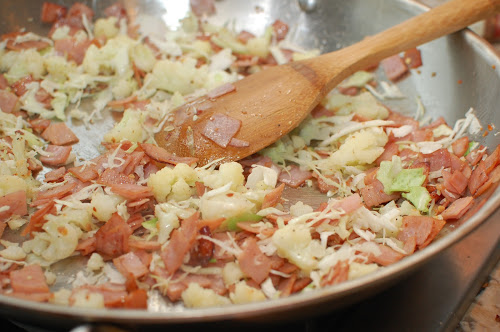 Add the cooked pasta to the mixture and toss together.  I didn’t end up using a whole pound of spaghetti…I held some out so I could have a better ham/noodle ratio.  Add some more drizzles of olive oil to moisten the mixture and stir in a couple handfuls of grated Parmesan.  Eat!! 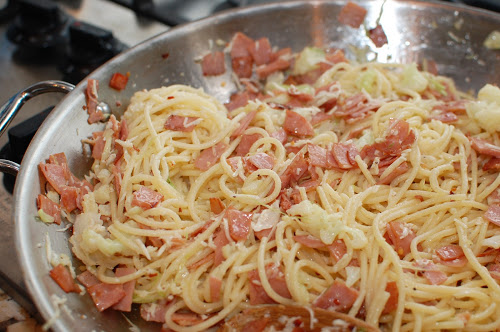 This would be great served with a salad and some yummy fresh bread with dip.

If you come up with a more appealing name, let me know!
Spaghetti with Cauliflower & Cabbage