Caden, my oldest, is BY FAR my pickiest eater.  Ask me what he doesn’t like and it would be easier to tell you what he does like…I could probably count everything on ONE HAND!  When you’re kid doesn’t like pizza OR chicken nuggets, you’re in a world of trouble.  That’s how deep our problem lies.  He would be happy if every day he could eat: ramen noodles, mac n cheese, crisp bean burritos, chips, and…hmmm…there’s gotta be something else…oh, beef jerky.  Oh, and get this…he told me that the school cafeteria is the best restaurant in the world!  I know, right?!?  Every time I made something he would tell me his school does it better…isn’t that the biggest insult??  He’s so lucky I love him or he would have become homeless a long time ago.
So, knowing that homeschool was about to start…I began to plan an intervention on my son.  Homeschool would be perfect because I could make this new project an “assignment”…that means, “required or you will die.”  It’s turning out to be fun, so far…and HOPEFULLY, will inspire him to try more foods.
Here’s the scoop:
I figured that since Caden was such the “food critic,” I was going to enroll him in a cooking class (at home).  Together, we would decide on a recipe to make.  I would teach him and guide him along while he did nearly everything from start to finish to make the recipe.  Afterwards, he HAD to taste it and decide if it was worthy enough to go in his soon-to-come cookbook that he will have professionally printed (Shutterfly?) and will give to his grandparents for a gift.  If he thought it was pretty good, he has to take a picture of it and do a little write-up about his experience making the recipe and his opinion on the outcome.  I can’t wait to see the finished product!
Caden was um, well…devestated…when I broke the news to him that he was going to be learning to cook.  Not only was he worried about trying the new foods but “cooking is for girls.”  The little punk.  He’s been hoping all along that I would forget about it, but I didn’t.  Earlier this week we had our first class.  I decided we would try our hand at making rolls.  I thought it would be fun for him to learn about yeast, see them rise, roll the dough out and get a little messy.  At first, he grumbled about it…but, once he got going, he was having fun!  Any time his siblings tried to help out, he quickly shooed them away.  We found this yummy recipe from on Deals to Meals web site (by The Food Nanny) and I’m not kidding…they turned out SO good!  Everyone was raving about them, patting Caden on the back, and now he is BEGGING to do another cooking class.  He felt so proud, and I know it will be a treasure for him to eventually have his own printed cookbook.
So, here’s a few pics of our first cooking class.  I make him wear his Scout shirt at all times so that he remembers to do his best, to do his duty.  Okay, not really…he just found it after having lost it for 6 months…so, he thinks its great to wear.
Being so careful to not pack the flour and feeling like the cleanliness of his Scout shirt is more important than any repercussions of wearing his mama’s apron…
Rolling, cutting like a pizza, then rolling them up again…this was his favorite part!
Pretty impressive, eh??
This recipe made 2 pans of these puppies, so there was plenty to share with friends and family.  Plus, the extra “Caden, you made these?!?” made another cooking class with mom sound pretty enticing.

So, here’s the recipe: 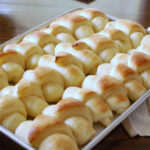 Dinner Rolls To Make You Drool