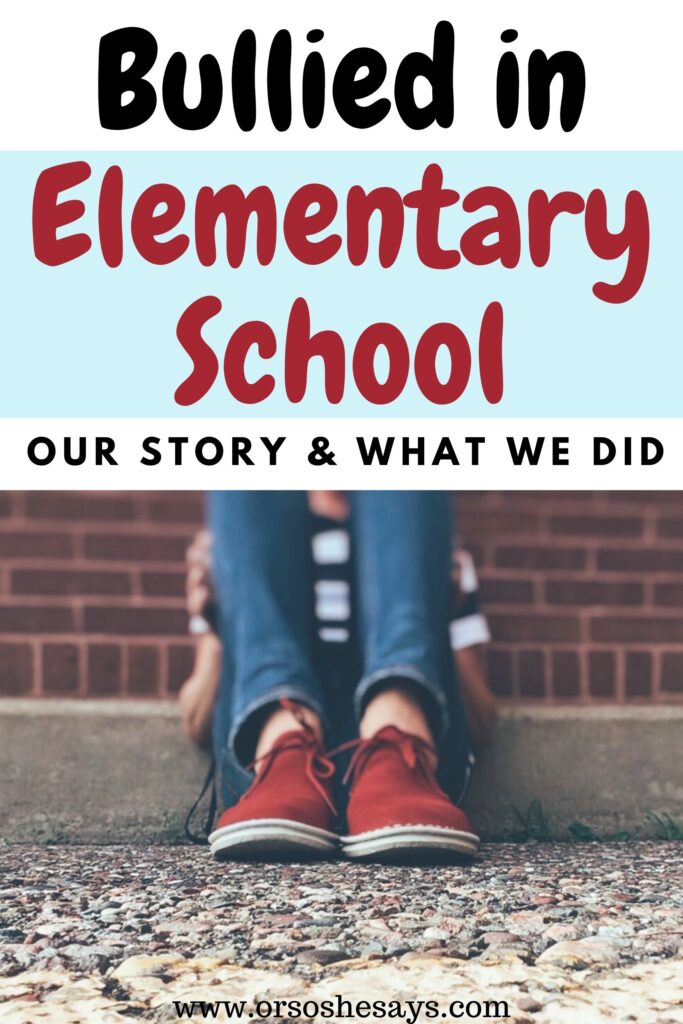 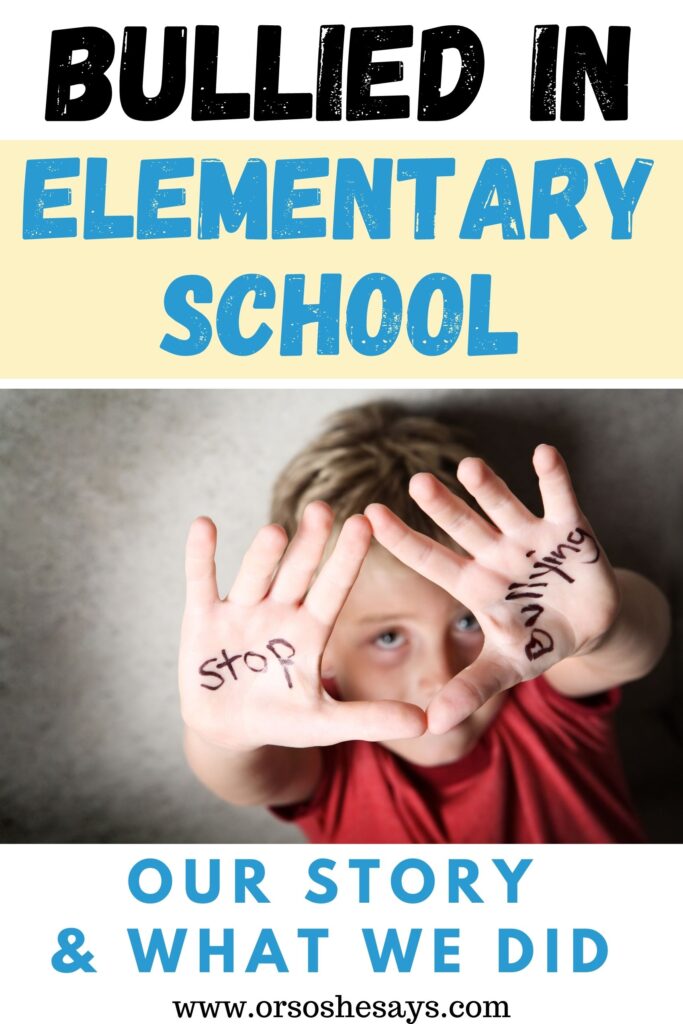 It seems that every woman has something that tugs on their heart strings, and can instantly bring them to tears. For me, it’s sad children. I just want to hug and love them all! I can’t stand knowing that there are many, many children who go through their life being treated so unkindly, whether at home, school, or both. It’s such a terrible thought (and reality.)

I wrote this blog post over 12 years ago, about my son, Caden, and his experience with being bullied at elementary school. I stumbled on it and a flood of memories came back. Caden is older now, but his story (though mild, compared to many) has always stood out in my mind as an important life lesson for both him, and myself. I thought I would reshare it with you today, in hopes that it will inspire you to do what you can for a child who is being bullied, whether it be your own, or any of the children in your area (and beyond.)

I definitely don’t know all the answers, and I realize that what worked in our situation, may not work for others. There are lots of great resources out there. But I know that sometimes, personal experiences and tested solutions can be helpful to hear about, as well.

Our ‘Bullied at Elementary School’ Story (& How We Handled It)

Every day when I drive to my children’s school, I notice a couple kids that will be walking around all by themselves at recess, or sitting by a tree. There’s a chance that they need a moment by themselves or that they love to be alone, but it’s probably more likely that they are yearning for recess to be over. Recess and lunch seem to have a way of making the loners stick out.

I have memories of that from my own childhood, when I felt I didn’t have many friends, as the new girl in school. I would hang out in the bathroom stall during lunch, because it felt too embarrassing to eat alone. And, I would cling to the recess monitor (an adult), because I was too shy to initiate a new friendship with the kids. Being in class tends to bring relief… a chance to blend back in to the crowd.

Bullying or exclusion of children affects everyone, whether it happens to your child or not. How? Several reasons…

These kids are the future. A horrible childhood, or even a harsh moment of bullying, can affect a child negatively for the rest of their life. Think of the potential that could be lost. We need strong, good, kind people in this world. It’s not an easy place to live and the younger generations need us to rally around them, more than ever.

Another thing… bullied children go to school with YOUR children, and sometimes bad things can happen when they reach their boiling point. That’s scary, for everyone. Obviously, fear is not the most noble reason to do what’s right, but it’s something to consider in the case for bullying affecting everyone. School shootings really happen and bullying has been found to be at the root, in some situations. Could things have been different if the child had been loved and accepted? We may never know, but reason suggests that it’s very possible.

Most importantly, these are children… CHILDREN. Their little hearts are fragile. They need us, big people, to be there for them. Children need love, acceptance, encouragement… all the things we craved as well, when we were children. I love the idea of it takes a village to raise a child. A child might not be yours, or your ‘responsibility,’ but what a neat thought that you can still have a positive impact on them, by simply loving and accepting them… as a neighbor, teacher, grandmother, etc. I’ve always thought that the more people that love a child, the better. It’s important to me that my kids develop relationships with as many extended family members as possible. Lots and lots of love, PLEASE!! And, I sometimes fail at this, but I hope the children in my circle feel my love for them. I have to remind myself to slow life down and focus on the more important things… like, children and their needs.

I have several memories of children that were friendless or bullied back when I was in grade school. They haunt me to this day. Not because I was the perpetrator, but because I didn’t do anything to help them. There was this girl on my school bus…she had severe acne, was extra tall and lanky, and was incredibly shy. She was tormented to NO end. Everyone would put their backpack on their seat so she couldn’t sit down by them on the bus.

I remember one day some boys tied tampons into the ends of her hair and she just sat there. She was too afraid to move. I would give anything to go back in time and stand up for that girl. I was too afraid. I didn’t want to be a target too. I wonder all the time whatever happened to her and how her life is today. I would love to give her a hug and tell her I am sorry that I never stood up for her. I hope that she was able to turn into a strong, productive, happy woman. I really, really hope.

The sad thing is that it happens a lot AND it can be helped.

What are they?? We’ll get to that in a minute.

Of course, I always hoped I would never have the experience of my children being bullied (or being friend-less), but it happened. And, I’m so glad it did. I learned a lot from that little experience. Last year, my oldest son, Caden, started 1st grade. We recently built our home so we are new in this area. Many of the kids at school already know each other and have that advantage. Problem number two, Caden is a quiet kid. It takes a while for him to open up and feel comfortable playing with other kids. But, he’s a stinkin’ cutie and incredibly sweet.

Anyway, I picked him up from school and asked him to rate his day from 1 to 10. It was a “negative 10.” I had never heard anything under a 6! I prodded and he told me that at recess he was walking around by himself, because he didn’t know who to play with. There was a group of boys nearby and one of them yelled out, “Look at Caden, the loser!” The rest started laughing.

Ugh….my heart broke. It broke Caden’s heart. Caden is anything but a loser!

Part of me wanted to cry and the other part of me wanted to find that kid, shove him against the wall and tell him that I’ll kick his effin’ rear-end if he EVER speaks to my kid like that! Obviously, I chose to cry… inside. What could I do? What am I supposed to do when that happens? If I do anything, will it make it worse? Will it do any good?

But, I am here to say that there are a few things that we did that significantly improved the situation! I am so happy with how things have improved. Caden has many friends now and really enjoys school.

How we (the teacher, myself, and my son) handled our bullying situation…

So, really…things are so good now with Caden but it’s something I continually keep tabs on. I can’t imagine how it would feel to be a mother or a child that deals with bullying (or having a friend-less child) on a regular basis. My heart and prayers go out to you. I got a small taste of this trial and it wasn’t easy. Please, never stop doing all you can. And, that applies to all mothers, in this situation or not. Let’s do all we can to help the children.

Although bullying might not happen to your child, there are things your child and you can do to help prevent it from happening to others.

1. Talk to your child about BEING A LEADER and not a follower.
2. Teach them to NOT ACCEPT bullying in their group of friends.
3. Teach them that it is RIGHT to stand up for somebody being picked on.
4. Teach them that it is kind and good to SEEK OUT those that aren’t being included, and include them in activities, the lunch room, parties, etc.
5. Tell them it is RIGHT to report bullying to the teachers.
6. Teach them it’s MORE IMPORTANT to do what’s right than to be popular.
7. ASK THEM about their friends and how they treat others.
8. TELL THEM about how bullying and having no friends can affect children.
9. SHOW THEM by example how to be considerate and thoughtful of others feelings.
10. KNOW the signs of bullied children and be open-minded that YOUR child might be the bully.

Sometimes, I think parents feel content that their child is “popular” and they are relieved from the burden of bullying. But, I think it’s wrong to stop there. A “popular” kid has so much influence and can use it positively to help others! Talk to them! Ask them if there is anyone they know that could use a little boost or a friend. Their kindness could make a world of difference! A difference so HUGE, they may never know. I’m so glad Caden got a taste of the “other side” so that he knows how horrible it feels to be bullied. I encourage him regularly to consider the feelings of others and look around to see who needs to be included.

I have this fantasy…to start up a volunteer organization. I have to put it off, for the time being, because I’ve got 7 children I’m still raising. But, it would be an organization that recruited high-school and college students to earn class credits or community service hours by spending lunch and recess at Elementary and Junior High schools. They would come armed with group games, activities, energy, happiness, and skills to bring children together. They would seek out the loners and help relieve the sadness they feel by including them and potentially helping them find new friends during their scariest times…lunch and recess. Their influence would teach other children that it’s cool to be friendly, kind, and inclusive to their peers. For the life of me, I can’t figure out why this isn’t already happening. So, if you have some time and have love to give….do this for me. You literally could be saving lives.

If you liked this ‘Bullied at Elementary School’ post, check out: