Hi! It’s Jamie again from Prepared Housewives – here to help you survive the Summer with games to help entertain your kids!

It’s easy to overdose kids with TV, video games, and catapulting Angry Birds around (everything my kids are currently doing right now 🙂 – but I encourage you to try to disconnect from electronics a few times this Summer and teach your kids they can actually survive without them. Entertaining kids without electronics doesn’t have to be a lot of work!

Many families pass down photos, memories, & names – well our family passes down GAMES! I decided to share our absolute favorite ones with you! Each time we play these I can’t help but think of going to Grandma’s and having some good ol’ family fun! 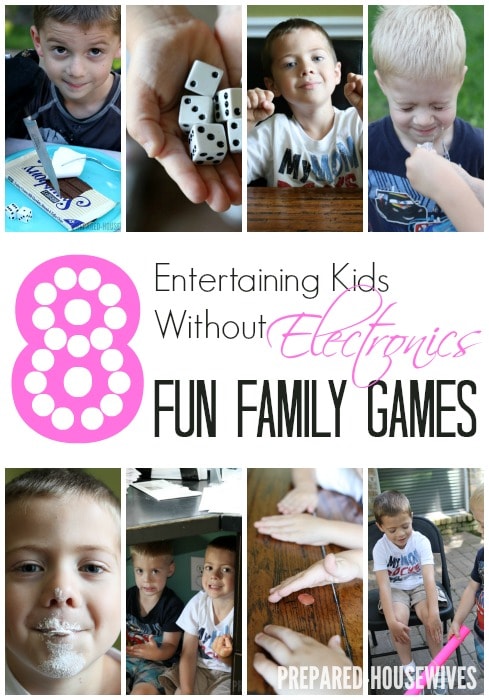 You may never go without electricity like I did during Hurricane Ike, but learning how to play games that don’t require ever being charged or plugged in have an amazing way of bringing families together!

Who knows? You may even create a few family games of your own to pass down to future generations! 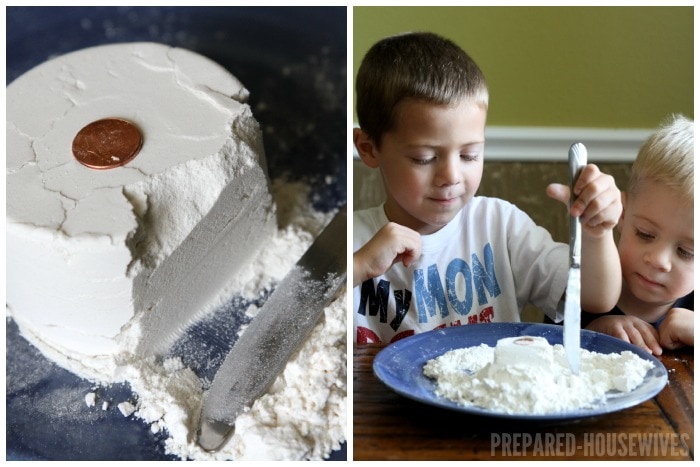 Pack in a cup of flour, and then flip it over onto a plate. Put a dime on the mound of flour and begin the game.

Each person takes a turn using the knife and cutting a slice of flour off, but can’t knock over the dime! If they do they have to dig it out with their teeth! This makes for a fun time and lots of good laughs! 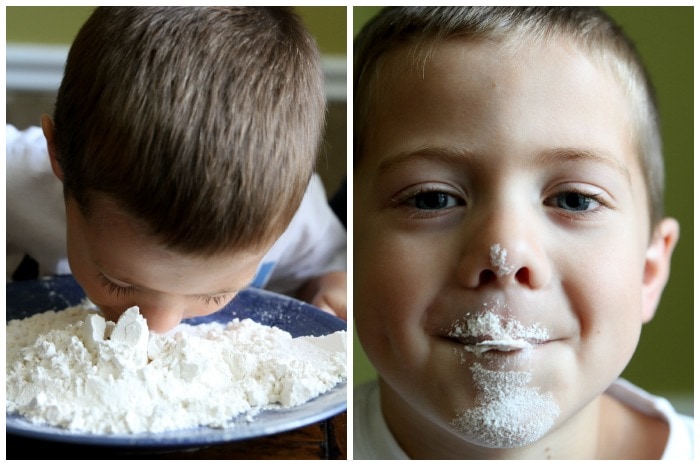 This one may sound slightly abusive but it’s not 😉 This is a great get-to-know you game and one we play often – maybe because we don’t get in trouble for hitting each other! 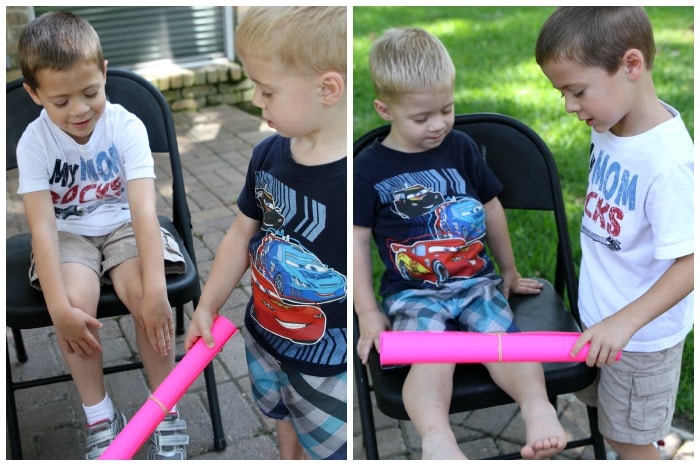 You need a rolled-up newspaper or something similar for the person who’s IT to use.

Before the game begins each person needs to figure out a nickname, something they love, or they can even use their real name. We usually make everyone come up with a food they like to eat that starts with the same letter as their first name. For example I could be Jamie Juice.

Once everyone figures out what name they want to use, everyone sits in a circle and the game begins!

Once someone is tagged, that person is now IT. The person that use to be IT, then calls out a name (BEFORE sitting down), and the game continues.

Sounds more complicated then it really is, but believe me, it’s a ton of fun!

A colorful bandana may be used for the ‘bacon‘. Leader calls numbers and keeps score. When leader calls “2” – each player with the number 2 races for the bacon.

The team whose player gets the bacon scores 1 point. Game should continue at least until each person has had a turn.

One player hides while the rest count to 100. When the counting is finished, they set out to find the player who hid. When anyone finds the person that hid, he doesn’t let anyone know, but waits for a chance when he thinks no one is looking and then joins him. 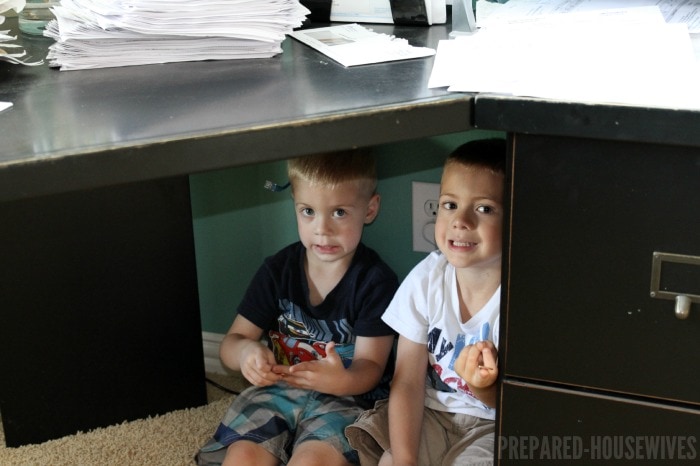 Finders are soon packed in with the person that hid. When the last hunter discovers the spot, the game starts over, the first finder becoming the one that hides.

This is a big hit with the kids!

Put the un-opened candy-bar on a plate and take turns rolling the dice. When someone equals a 7 or 11 with the dice they immediately put the gloves on and try opening the candy bar with the fork and knife. 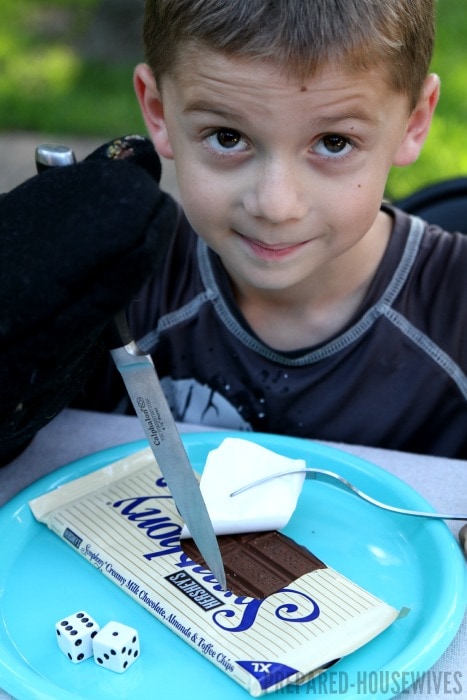 While the person is trying to open the candy-bar the others continue to roll the dice. As soon as someone else rolls a 7 or 11 they take the gloves, knife, and fork from the person who had them and continue to try and get the wrapper off. If the wrapper is already off they try and cut the candy bar into pieces and start eating!

You play this until the candy bar is gone!!!

You need a thimble or something very small to hold water. You could always change it up to a full glass of water if you’re wanting to get drenched 😉

Pick someone who will be IT and have them come up with a category and think of their favorite – animals, places, cereals, desserts, etc. The IT person will then walk in front of each person in the circle and they must name something within the category. For example if you are doing favorite cereals each person would name a cereal – golden grahams, cookie crisps, honeycombs, etc.

Once someone names the thing the IT person was thinking they get splashed in the face with the thimble of water. That person is then IT and they can either think of something from the same category or pick something new. 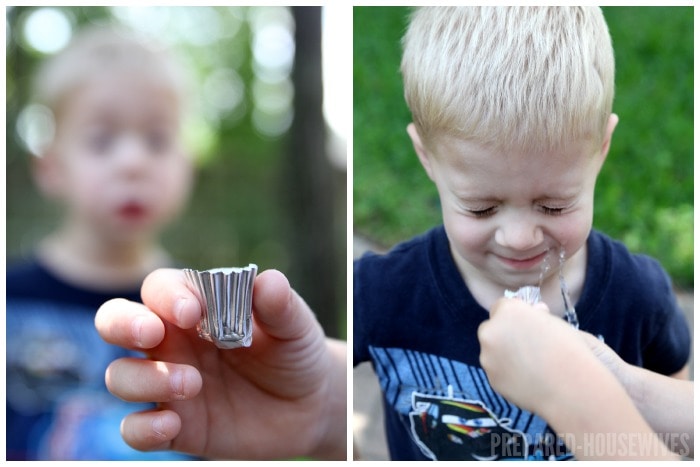 Also, NO REPEATING! If someone repeats something that has already been said they get splashed in the face with the thimble of water, but the game continues on until someone says what the IT person is thinking.

You can usually find a penny laying around, so this is one game that can come in handy anywhere!

You break up into 2 teams and sit around a table – teams sitting across from each other. The team with the penny puts their hands underneath the table and secretly passes the penny to one another. 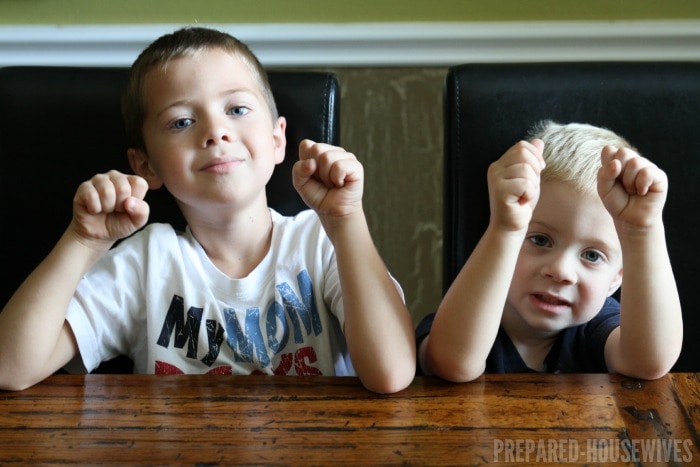 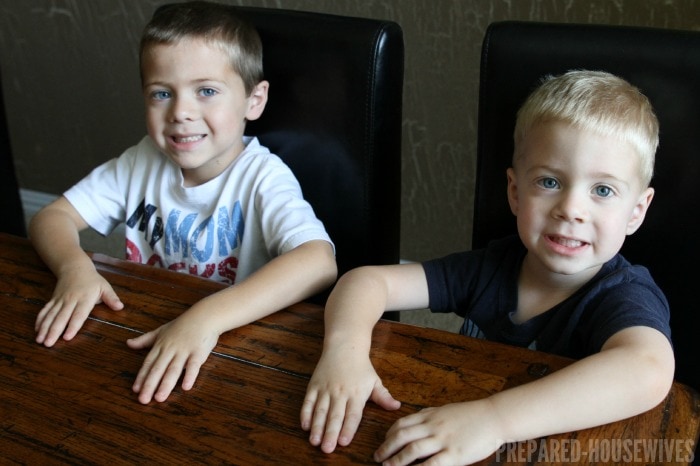 The team without the penny then guesses who has the penny by pointing to a hand and saying “hand-up”. They continue to point and guess which hand has it until they guess the right one. Once they guess correctly, their team gets the chance to hide the penny and the other team gets to guess. You usually play until at least everyone has had a turn! 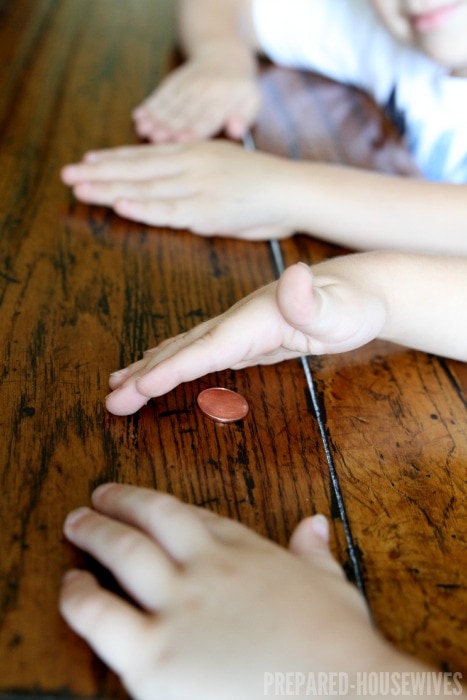 There’s really no winners or losers, it just makes for a fun game to play with family and friends!

We are Farkle junkies. For awhile my husband and I played this nightly until he started getting an insane amount of luck and was winning consistently. 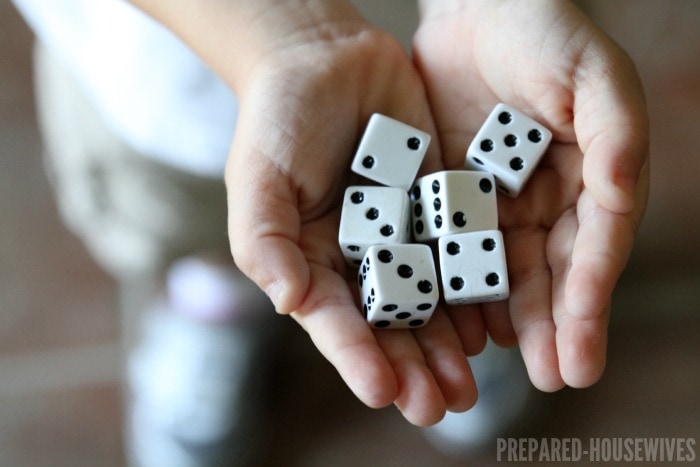 You need 6 dice for this game and each person takes turns rolling the dice to collect points.

To Earn Points you need to roll:

Everyone seems to have a slightly different point system with this game, so don’t send me hate emails if this is a little different than the way you play 😉

Each player’s turn ends when:

You stop playing once someone reaches 10,ooo points! Each person then gets one more chance to try and get more points, and whoever has the most is declared the winner!

My mom would always have dice in her purse, so if we were ever caught waiting anywhere for a few minutes we would bust them out and start playing! You can always play a game of Yahtzee too – since you already have enough dice!

Are there any games you love to play as a family?

Let me know! We love games and are always looking to add to our list!

Also, feel free to print this list off so you are always prepared to entertain kids when there isn’t an I-pad nearby 😉

More ideas to help entertain your kids this Summer…

Send them to PREP School 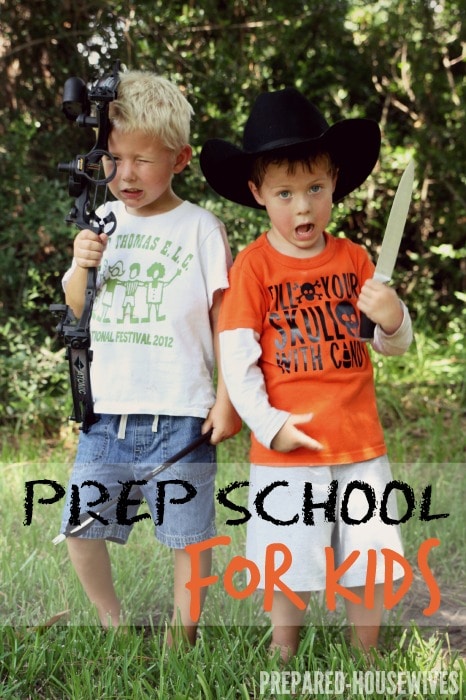 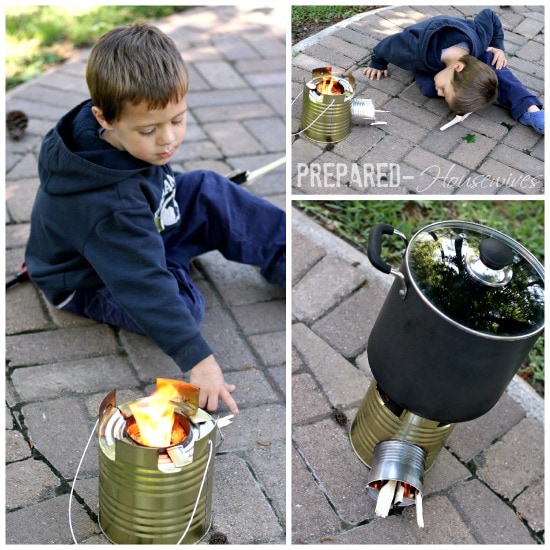 Make some Hot Pepper Jelly Together
– and then send me some 😉 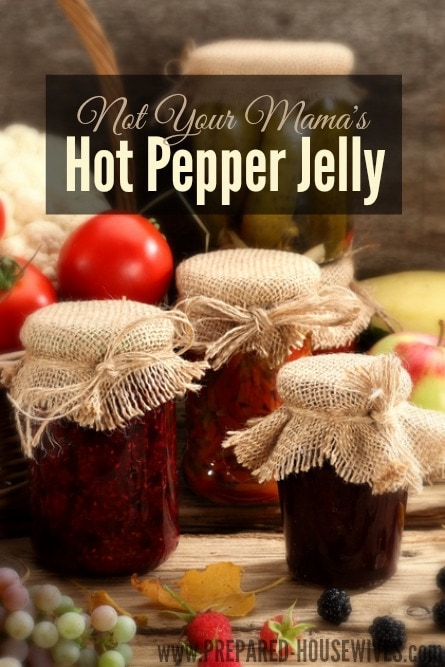 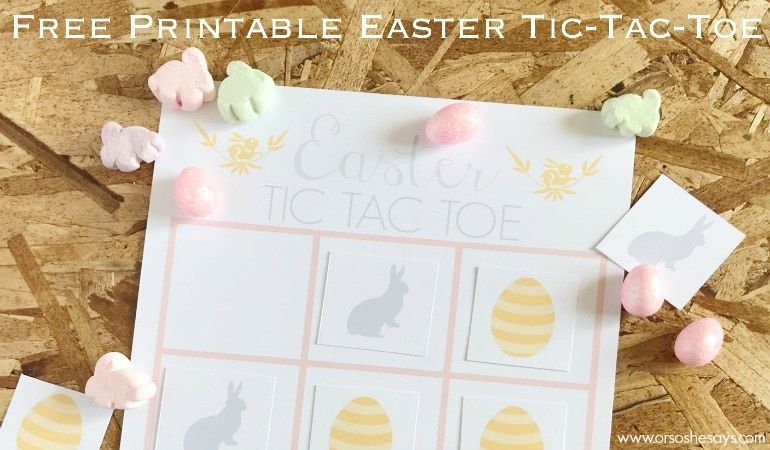